Turn your old device into a Chromebook with Chrome OS Flex

Sometime in 2020, Google acquired a startup called Neverware, a company that targets users who have old computers, whether Windows or Mac, as it provides them with a way to turn their devices into Chromebooks through its operating system known as CloudReady, which was developed based on Google's Chromium OS project is open source.

Now, two years later, Google has reaped the fruits of this acquisition by announcing recently the launch of its new operating system under the name "Chrome OS Flex", which came to complement CloudReady's march and be a real alternative to the popular operating systems, Windows and Mac on older devices so that it can make it run fast as if it were Modern equipment and thus take advantage of them.

Fortunately, the new system is completely free and available to install on almost any computer, so if you now want to try Chrome OS without buying a Chromebook in a safe and official way, here are the steps to install and run Chrome OS Flex on your computer. 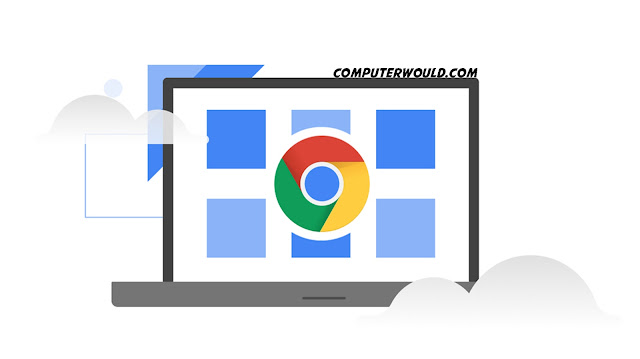 Chrome OS Flex tends largely to be a cloud operating system, just like Chrome OS, meaning that it relies on an internet connection for most of the functions a user can perform, which makes it a "lightweight" system suitable for older computers. In addition, Chrome OS Flex is designed to provide the level of protection needed these days to keep the user away from common security threats.
Designed for low-end devices, Chrome OS Flex is a must-have on any computer. However, Google has published a list of certified devices that have been tested and tested with the new system. You can view it from the Certified models list page, but even if you find that your device is not on the list, you will be able to install Chrome OS Flex without a problem, but there are no guarantees about the stability of the system. Also, some functions on the device may not work, such as controlling the screen brightness or the Touchpad on the laptop..and so on. But at a minimum, you'll need a computer with at least the following:
If your device meets the above conditions, apply the following steps to install Chrome OS Flex. 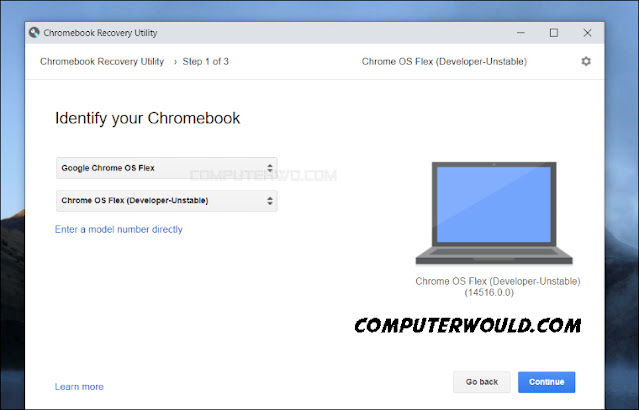 We will be using the Chromebook Recovery Utility extension to burn Chrome OS Flex to the flash drive. After downloading the extension from the Chrome Web Store on the Google Chrome browser, launch it and a pop-up will appear in front of you. Click on the “Get Started” button and on the next page click on the “Select a model from a list” option, then open the Select a manufacturer drop-down menu and select “Google Chrome OS Flex” and then in the second menu select “Chrome OS Flex (Developer-Unstable) and click "Continue" to continue. 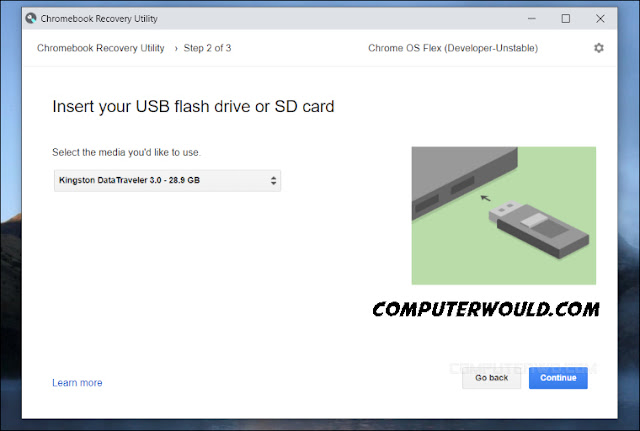 After that, you will need to connect and choose the flash drive you want the system to be burned on, knowing that you need a flash drive of at least 8 GB in size and it must be completely empty in order for the system burning process to succeed. So once the flash is connected, select it and press "Continue", then confirm that you want to burn the system to this flash drive by pressing "Create Now".

The Chromebook Recovery Utility will then download a copy of Chrome OS Flex and then install it on the flash drive and make it bootable. Depending on the speed of the Internet as well as the speed of writing to the flash, the process will take some time. So be patient until you finish and a window will appear in front of you as shown in the image above. 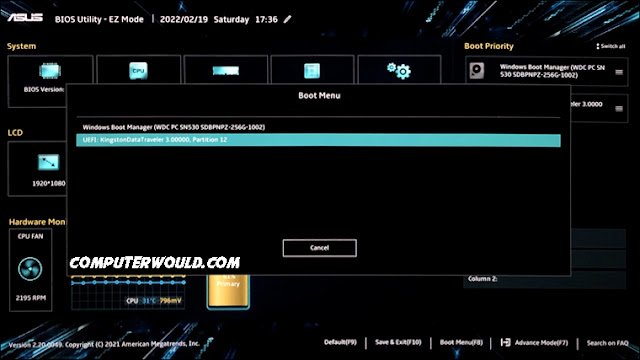 You now have a flash drive with a copy of Chrome OS Flex ready to install the system. So the next step is to go to the BIOS screen to make the computer start booting from the flash drive instead of the internal storage, and let's agree that this process differs from one device to another. For example, on our ASUS laptop, we needed to press and hold the F2 button and turn on the device while continuing to press F2 until the BIOS screen appears, after that we click on the Boot Menu option at the bottom and then select the USB flash drive and press Enter to start booting to the flash drive, not the hard drive. 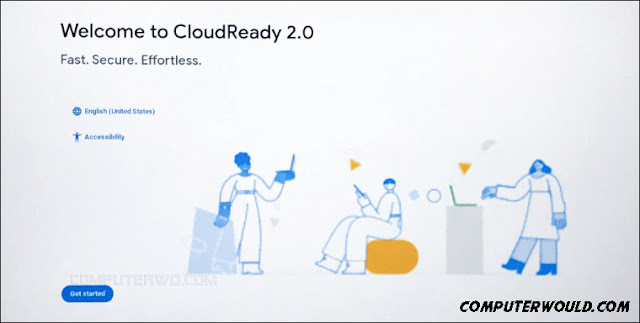 Once you boot into the flash drive, the "Welcome to CloudReady 2.0" screen will appear, select the language, then press the "Get Started" button, then follow the on-screen instructions.
You will be asked to agree to the license agreement and terms and then the Internet connection will be checked. If the device is not connected to an Ethernet cable, the system will prompt you to choose a WiFi network to connect to. Unfortunately, this cannot be skipped as the installation process is highly dependent on the Internet connection. 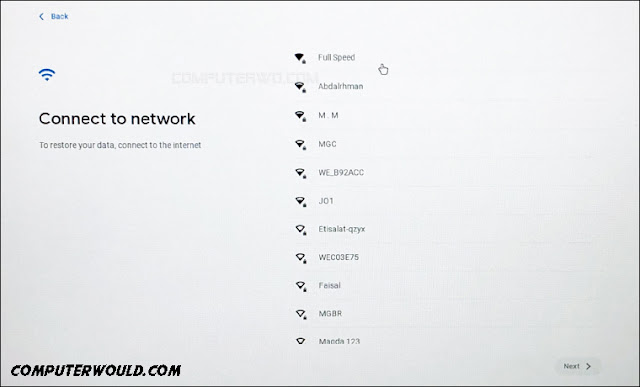 After connecting to the network, decide whether you want to install Chrome OS Flex on the computer or try it first. If you choose Install CloudReady 2.0 everything will be erased on the hard drive. Unlike Windows, you cannot install the system on a specific partition in the hard drive. Therefore, we highly recommend choosing "Try it first" to make sure that the system is running smoothly on the computer and there is no problem with the compatibility of components with Chrome OS Flex so as not to lose the functionality of the device. 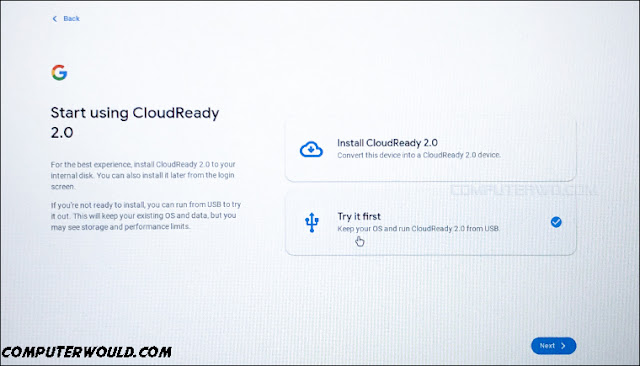 You will also be prompted if you want to try to sign in as a guest or with your Google Account. Signing in with a Google Account automatically signs you in to all of the Google apps on the device, just as if you were setting up your Chromebook for the first time. 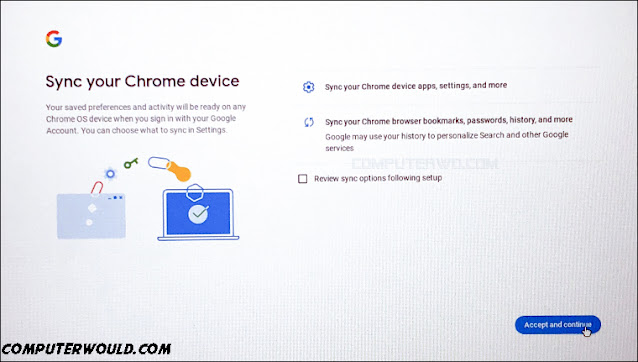 Once the setup steps are completed, the main interface of Chrome OS Flex will appear in front of you, which is a very simple desktop and somewhat similar to what is found in Windows, where the taskbar is at the bottom and the icons are centered in the middle of the screen, and there is also on the far left a button that displays all installed applications such as the Start menu.
By default, the system comes with a good set of pre-installed Google applications from YouTube, Gmail, Google Meet and of course the Chrome browser in addition to Google Assistant support, but the user can install more other applications through the Chrome web store, which contains a huge number of basic applications. Unfortunately, Google did not provide the system with the Google Play Store as in the original Chrome OS but we hope to add it in future versions of Flex. 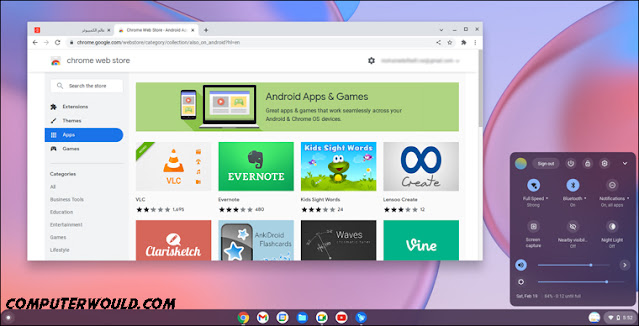 As for performance, of course it will differ from one device to another, sometimes you find that the graphic interface of Chrome OS Flex is very responsive and smooth on your computer, but on another computer it will be slow. Again because the system is under development which means it has a "compatibility issue" with most devices.
According to our experience with an older laptop over 5 years old with an Intel Celeron processor... the Flex worked very well – all of the device's Wi-Fi, Bluetooth, audio and touchpad functions worked perfectly, the performance of the system itself was surprisingly stable Bearing in mind that I am using an incompletely developed version! There are windows that move smoothly, there is no trace of irritation when opening and closing applications, device resources are consumed wisely, boot time does not take more than a minute on the hard disk. All of which makes Chrome OS Flex promise to be the perfect OS indeed for older PCs.
Edit This Article
Tags Computer programs