How to activate the new Windows Spotlight feature in Windows 11

Microsoft released the stable version of Windows 11 in October 2021, which included significant and sufficient changes to achieve a major upgrade from Windows 10, but the company did not stop there, but continues to extend the system with new and important features through updates, such as this update that I launched last November and contains Lots of new features. One of the most recent features is the ability to automatically update your desktop wallpaper on a daily basis. This feature is called Windows Spotlight, and if you haven't activated it yet, here are the steps we list through the following lines.

What is the Windows Spotlight feature?

Windows Spotlight is one of the important features we are waiting for in the upcoming Windows 11 updates, as Microsoft introduced this feature for the first time in one of the beta versions of Windows 11 and has been under trial for a long period of time, until yesterday, corresponding to June 16, 2022, the company decided to add the feature in the version Stable with the monthly cumulative update codenamed KB5014697.
The feature is aimed at people who constantly change their desktop wallpaper as Windows Spotlight updates the desktop wallpaper daily and sets a new one. These images are selected by Microsoft and the feature relies on the device's internet connection to automatically download these wallpapers and set them in the background. That is, once you activate it, every day you turn on the computer, a new desktop wallpaper will appear. Previously, to get this experience it required the use of Bing Wallpaper tool from Microsoft but now it is not needed with the new update.
Certainly, Windows Spotlight is not a completely new feature, as Microsoft has also included it in Windows 10, but it was intended to update the background of the lock screen. In Windows 11, this feature is now working to update the background in the lock screen and the desktop together.

How to activate the Windows Spotlight feature in Windows 11

Activating the Windows Spotlight feature is very easy, but the only condition is to make sure that the version of Windows 11 on your device is updated to the latest version, as of the time of editing these lines, which bears the number 22000.739. If you are not sure of the build number, just go to Settings, then go to the About page in the System section, and there you will find the build number in front of the "OS build" field. If it is less than required, head to the Windows Update section and check for new updates. 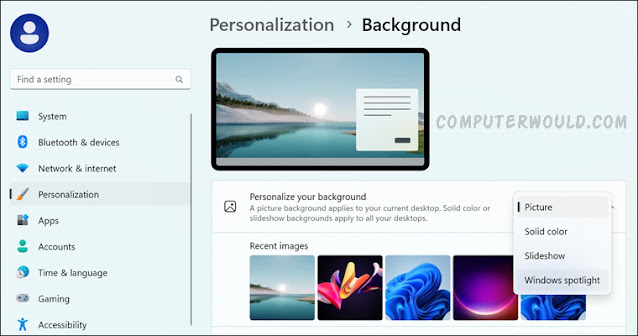 If the version of Windows 11 on your device is 22000.739 or higher, you can activate the new feature by opening the Settings app using the Start menu or by pressing the Win + I (E) keys together on the keyboard, then head to the Personalization section from the side menu, then press On "Background" and then open the drop-down menu in front of "Personalize your background" and you will find the new option "Windows spotlight" listed in the list, select it.
Once you do that you will start to see a new wallpaper on your desktop. Apart from the new background, you will also notice that a new "Learn about this picture" icon appears on your desktop, which you can double-click on to see information about the current background such as where the picture was taken, what it crosses, and so on. But if you right-click on the icon, you will see a set of options, the first Switch to the next picture changes the background and replaces it with a new one, and the second and third allows you to tell Microsoft whether the wallpaper you liked or not, if you liked it, the next wallpapers will have the same features.
Edit This Article
Tags windows