Activate the Windows Sandbox in Windows 11 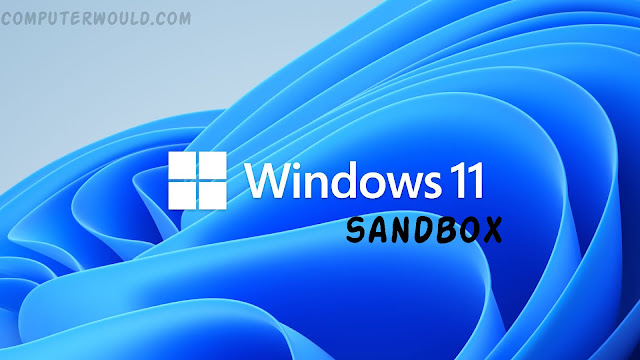 Microsoft introduced the Windows Sandbox feature for the first time with the release of the May 2019 update for Windows 10 and it became part of the system even in the new operating system, Windows 11. In case you did not know, this feature allows the creation of an isolated virtual environment, i.e. creating a virtual computer inside the main computer! In order to install and test suspicious software, once the testing is done, all you have to do is close the Sandbox window and everything you have done in this virtual environment will be erased.

Of course it is very useful if you need to try many unknown programs and you suspect that they may harm your device, you can activate the Windows Sandbox and test those programs without affecting the computer. Unfortunately, this feature is not enabled by default in Windows 11, but you need to activate it through easy steps, let's review them below.

Microsoft added many new changes to the Windows Sandbox feature in Windows 11, most notably changing the icon of the operational application of the feature and also support for performing operations such as “restart” without stopping the feature, as is the case in the version available in Windows 10. But the function of the feature remains the same as once you turn it on it becomes Against another copy of Windows 11 on a virtual machine, the only difference is that no changes are preserved when you exit it. This is in contrast to virtual systems that can be run by software such as Oracle VirtualBox which keeps your data stored on the virtual machine even after it is closed.

How to activate the Windows Sandbox feature in Windows 11 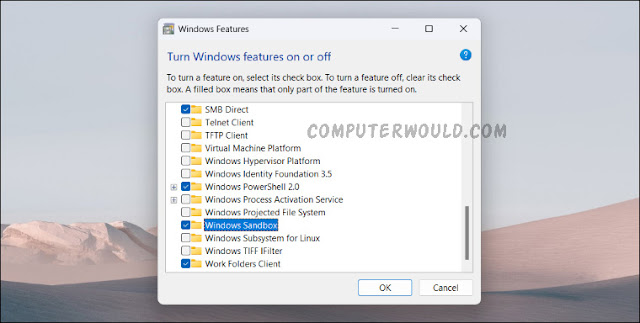 Activating the Windows Sandbox feature in Windows 11 requires the use of the Pro or Enterprise version. But these are not the only conditions, you will also need to enable the virtualization feature through the BIOS settings. In addition to the need for a dual-core processor and at least 4 GB of RAM (8 GB RAM recommended), there should be at least 40 GB of free storage space on the hard drive. If these requirements are not met on your device, the Windows Sandbox feature will not work even after the installation process is completed, but we will put a side solution to force the feature in the Home version.
Well, to start activating the Windows Sandbox feature, you will open the Windows Features window by opening the Run window by pressing the Win + R (s) key together on the keyboard, then typing the "optionalfeatures" command and hitting the Enter button. From there, scroll down until you find the Windows Sandbox feature listed, now put a check mark (✔) next to it and hit the OK button. Wait for the files required to run the feature to be downloaded through the Windows Update service, then after completion, press Restart to restart the device.

In Windows 11 Home Edition, you will not find the Windows Sandbox option listed in the Windows Feature menu because it is not supported as we mentioned earlier, but you can activate it forcefully by making some modifications to the system files. It only requires downloading a batch file (Sandbox Installer) that performs the required modifications in one go easily, so you can start downloading the file through this link directly and then right click on the file and choose "Run as administrator".
Now, a Command Prompt window will open to start entering the necessary changes in order to activate the Windows Sandbox feature in Windows 11 Home. It only takes a minute and after completion you will be asked if you want to restart your computer to apply the changes, enter letter "Y" and press Enter.

After you turn on your device again, the Windows Sandbox feature will be ready to use and you can turn it on in several different ways such as opening the Start menu, then pressing "All Apps" and scrolling to the bottom of the list of applications and programs where you find them at the bottom of the list. Or you can also type Windows Sandbox into the search field on the Start menu and an Open button will appear in the search results to launch the feature directly. It usually takes some time to boot up until the virtual environment is set up, knowing that at that time a large amount of device resources will be consumed; So if you are working on other programs, it is preferable to close them to reduce the burden of consumption on the processor, hard disk and RAM. 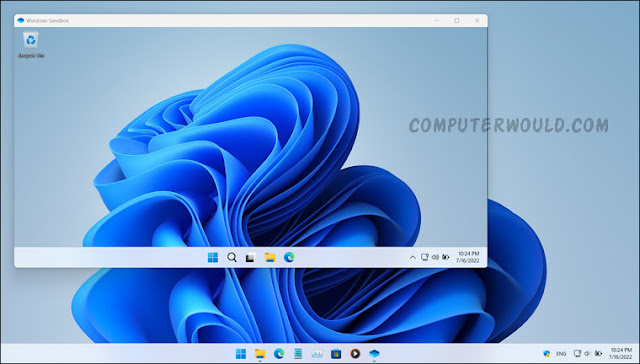 Now you will see the Windows Sandbox window which is a virtual environment isolated from Windows 11 where you can do whatever you want away from your main computer, again, as if you installed Windows 11 as a virtual system with VirtualBox. You can also copy files from your device to this environment using the keyboard shortcuts Ctrl + C and Ctrl + V, so if you intend to test unknown programs or open a suspicious file, you will be able to easily insert it into the virtual environment without having to re-download this program or file
Edit This Article
Tags windows